Scores Trapped As Churche Collapses on Worshippers During Mass in Isoko 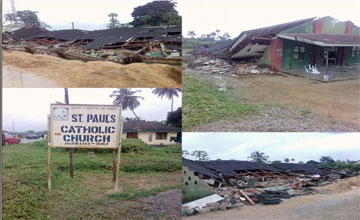 The Delta State Commissioner of Police, Muhammad Mustafa, confirmed that one person lost his life in the incident, while some persons sustained injuries.

Jeffery Jackson, aged 11, was said to have been trapped while trying to escape from the building as it collapsed.

According to eyewitnesses, the service was just just starting off, although the officiating cleric was yet to arrive.

However, worshippers had already assembled and were doing initial service rituals when the building collapsed.

It was also gathered that no church member was still trapped under the rubble of the collapsed walls, as all those inside escaped unhurt, except for the deceased and the five injured persons.

She said: "I was inside the church when it happened. It was between 7:30am and 8am. We are under Orerokpe, so they posted a seminarian to us. The seminarian had not yet arrived when it happened. We had just finished reciting the rosary and were singing some hymns, when we suddenly started hearing the wall cracking and falling.

"At that point everybody started running out to escape the falling walls. Before long, the entire church had collapsed. It even killed someone; a boy of about 11 years of age. The five persons who were injured have been taken to the hospital."